Introduction to Batch File Viruses: We’ll be learning about batch file viruses. We’ll look at various techniques used in small and simple batch file scripts. Even if you have no background in programming, you’ll find it very easy to follow along and learn.

What are batch files?

A batch file is a name given to a type of script file, a text file containing a series of commands to be executed by the command interpreter. Batch files have the extension .bat(or .cmd). They can be easily created using any text editor such as notepad. See here for more details about batch script file.

Now let’s see some of these commands.

The echo command is used to print out a message, in this case, “Hello World”. Type up the above in a text editor and save it as something.bat. Now open it and a command window pops up. But you’ll notice that it closes before we get a chance to see what it outputs. Let’s fix that.

The pause command pauses the execution of the batch file until a user presses a key. You should now see the following output:

then actually executes it to output  Hello World. Let’s see if we can clean this up a little for better GUI (graphical user interface) purposes.

@echo off is used to stop the commands from being printed and leaves only the output of those commands. Now let’s add a little dynamic behaviour.

The set command is used to define variables that can hold different values, in this case the string “Bernie”. The variable name enclosed within %% is how we access the value stored in the variable.

Run the above and you should see:

Be careful here, the set command is pretty sensitive to the use of spaces:

means a has the value ‘Bernie’.

and (with a space before =) means that the variable is not defined as a but as a (‘a ’ followed by a space).

Some commands come with modifiers that slightly alter their behaviour:

In set /a, the /a part is telling set that it should treat the value of the variable as a number, allowing us to perform mathematical operations on it.

The /p modifier tells the set command that it should take in some input from the user and store that in the variable a. When you run the batch file, you will be prompted to enter something. The output looks like:

That was pretty easy, now let’s take a look at a couple more batch files that might actually be useful and then we’ll go and make some viruses.

This outputs the following: 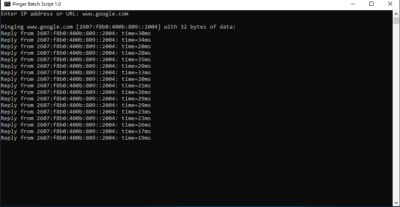 Used by itself or in conjunction with other batch script commands it’s pretty handy if you want to quickly ping an IP address/URL or check your internet connection.

This batch file schedules a shutdown after X minutes.

Almost anything your operating system does for you can be done through batch files. You can even use them to automate repetitive and boring tasks. Remember batch files are scripts.

Using more than one CSS property

Defining What an Application Is

How to make a go-back button with PHP code?

What is a Batch file?