Android Studios is Android’s official IDE. It is purpose-built for Android to accelerate your development and help you build the highest-quality apps for every Android device. We will be using Android Studios in this course.

Everybody wants a smartphone or tablet, and Android devices are hugely popular. In this course, we’ll teach you how to develop your own apps, and we’ll start by getting you to build a basic app and run it on an Android Virtual Device.

Along the way, you’ll meet some of the basic components of all Android apps, such as activities and layouts.

All you need is a little Java know-how…  Android is the world’s most popular mobile platform.

As of the date of this article, there were over two (2) billion active Android devices worldwide, and that number is growing rapidly.

Android is a comprehensive open source platform based on Linux and championed by Google. It’s a powerful development framework that includes everything you need to build great apps using a mix of Java and XML.

What’s more, it enables you to deploy those apps to a wide variety of devices — phones, tablets and more.

So what makes up a typical Android app?

We’re going to build our Android apps using a mixture of Java and XML.

We’ll explain things along the way, but you’ll need to have a fair understanding of Java to get the most out of this course.

Layouts are usually defined using XML, and can include GUI components such as buttons, text fields, and labels. 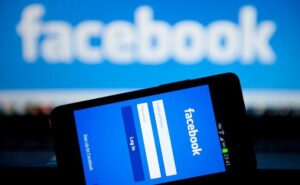 Layouts tell android what the screens in your app look like. Activities (JAVA) define what the app should (can) do. Layout is what you see on the screen. Pushing login, or chatting with friends, watching videos  are just some of the activities that you can do in the Facebook app.

Java code (activities) defines what the app should do, Layouts only define the appearance of the app. You define what the app does by writing Java code.

A special Java class called an activity decides which layout to use and tells the app how to respond to the user. As an example, if a layout includes a button, you need to write Java code in the activity to define what the button should do when you press it.

In addition to Java code and layouts, Android apps often need extra resources such as image files and application data. You can add any extra files you need to the app. Android apps are really just a bunch of files in particular directories really.

When you build your app, all of these files get bundled together, giving you an app you can run on your Android device.

The Android platform is made up of a number of different components. It includes core applications such as Contacts, a set of APIs to help you control what your app looks like and how it behaves, and a whole load of supporting files and libraries.

Here’s a quick look at how they all fit together:

Relax Don’t worry if this seems like a lot to take in at the moment. At this stage, I am just giving you an overview of what’s included in the Android platform. I will explain the different components in more detail as and when we need to. 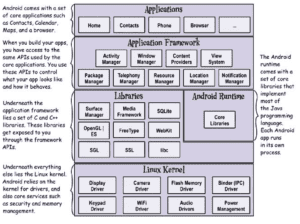 Android Under The Hood.

The fantastic news is that all of the versatile & powerful Android libraries are exposed through the APIs in the application framework, and it’s these APIs that you use to create great Android apps.

All you need is some Java knowledge and a great idea for your app.

Here’s what we’re going to do: create a basic Android app.

There are just a few things we need to do:

Set up a development environment.

We need to install Android Studios, which includes all the tools you need to develop your Android apps.

There are No bad Questions:

Q: Are all Android apps developed in Java?

A: You can develop Android apps in other languages too, but the truth is most developers use Java.

Q: How much Java do I need to know for Android app development?

A: You really need experience with Java SE (Standard Edition).

Q: Do I need to know about Swing and AWT?

A: Android doesn’t use Swing or AWT, so don’t worry if you don’t have Java desktop GUI experience.

Java is the most popular language used to develop Android applications. Android devices don’t run .class and .jar files. Instead, to improve speed and battery performance, Android devices use their own optimized formats for compiled code. That means that you can’t use an ordinary Java development environment — you also need special tools to convert your compiled code into an Android format, to deploy them to an Android device and to let you debug the app once it’s running. All of these come as part of the Android SDK.

The Android SDK The Android Software Development Kit contains the libraries and tools you need to develop Android apps.

In addition to providing you with an editor and access to the tools and libraries in the Android SDK, Android Studio gives you templates you can use to help you create new apps and classes, and it makes it easy to do things such as package your apps and run them.

Android Studio is a Java development environment, so you need to make sure the right version of Java is installed on your machine.

You can see the system requirements here: http://developer.android.com/sdk/index.html#Requirements

Then install Android Studio Once you have Java up and running, you can download Android Studio from here: https://developer.android.com/sdk/installing/index.html?pkg=studio

There are No Bad Questions

Q: You say we’re going to use Android Studio to build the Android apps. Do I have to?

A: Strictly speaking, you don’t have to use Android Studio to build Android apps. All you need is a tool that will let you write and compile Java code, plus a few other specialist tools to convert the compiled code into a form that Android devices can run. So once your app is converted and ready for the Google Play Store it will be a single file named: YourAppName.apk

APK (Android Package) file is a file format which is created by Google. This format is one of the group members of Executable Files (similar to EXE, MST, AIR). APK file extension is in the Open Handset Alliance which is a mobile phone platform based on Linux.

A: Android Studio is the official Android IDE, but Eclipse was a popular one among Android developers but faces serious competition from Android Studios.

Q: Can I write Android apps without using an IDE?

A: It’s possible, but it’s more work. Most Android apps are now created using a build tool called gradle. Gradle projects can be created and built using a text editor and a command line.

Q: A build tool? So is gradle like ANT?

A: Similar, but gradle is much more powerful than ANT. Gradle can compile and deploy code, just like ANT, but it also uses Maven to download any third-party libraries your code needs. Gradle also uses Groovy as a scripting language, which means you can easily create quite complex builds with gradle.

Q: Most apps are built using gradle? I thought you said a lot of developers use Android Studio?

A: Android Studio provides a graphical interface to gradle, and also to other tools for creating layouts, reading logs and debugging.

If you need any help with the installation click the green & black chat bubble in the bottom right hand side of your screen and a live web expert will be happy to assist you for free.

Who is this Android App Development course for?

Comparing Python to other languages